In colonial America, literacy was growing though writing letters was somewhat expensive when you included mailing. There was, however, a broad market and need for ink for diaries and books. Commercially manufactured ink was sold by printers, stationery and bookshop keepers, and even libraries. The ink bottles and inkwells were made by American glasshouses that used French, British, or India ink manufactured for distribution and imported to America.

In an advertisement in The Globe, Washington D.C., June 6, 1836, F. Talor announced that he was importing Eagle Quills, Swan Quills, Metallic Pens, Terry’s British Ink (red and black), Bertinguiot’s French Ink (red and black); and had all types of American inks in powder, sticks, and fluid.

In Pittsburgh, Pennsylvania, at about the same time, Arnold’s Chemical Writing Fluid advertisements peppered newspaper pages with reports of new ink imports from London. Bottles were being sold in two sizes at book and paper stores. By the mid-1840s, Hibbert’s Chemical Writing Fluid was sold in various bottle sizes at B. A. Fahnestock & Co. at the corner of 1st and Wood Streets.

In 1854, in the Pittsburgh Gazette, S. B. Lauffer at 87 Wood Street announced that he was selling a wide variety of inks such as Arnold’s Writing Fluid (black and carmine inks), Blackwood & Co’s superior steel pen ink, Walkden’s British ink, and powder, Harrison’s Columbian inks (black and red, scarlet and carmine), Warren & Co.’s Congress inks, Estel & Co.’s black inks for steel pens, Guyot’s French carmine ink, and Fitzpatrick & Co.’s black ink, together with a large lot of other inks. We suspect one of the “other” inks was Albert’s Writing Fluid, which may not have had the name or brand appeal to compete with the more widely known and popular inks.

Our early embossed “Albert’s Writing Fluid Pitts Pa” bottle is two 1/2″ tall and cylindrical. The consignor said that it was purchased from an old-time collection in the 1970s. The aquamarine glass is extremely whittled and crude. There is a bulbous ring at the bottom of the domed shoulder and another similar ring near the base of the bottle. The neck is long and cylindrical, connecting to a lip tooled to give a narrow-collar effect. The bottom has a blowpipe pontil scar.

The ink bottle is embossed on two opposite faces. The front reads, ‘ALBERT’S WRITING FLUID’ in a bold serifed typestyle between the rings and in two lines. The reverse is embossed ‘PITTS_PA’ on one line. The specimen is outstanding and appears to be unlisted. We also do not know who “Albert” might be. 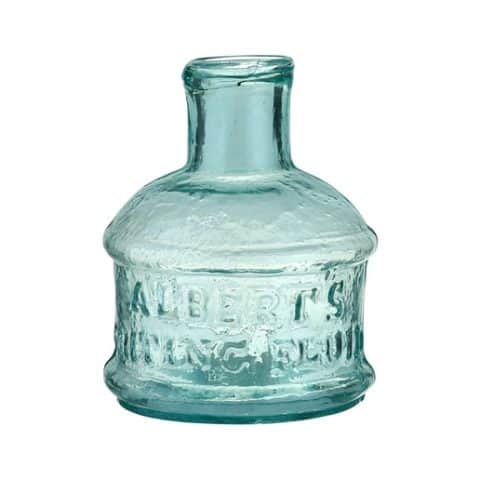 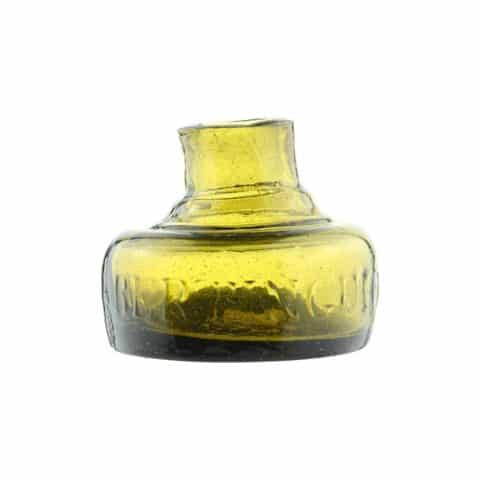 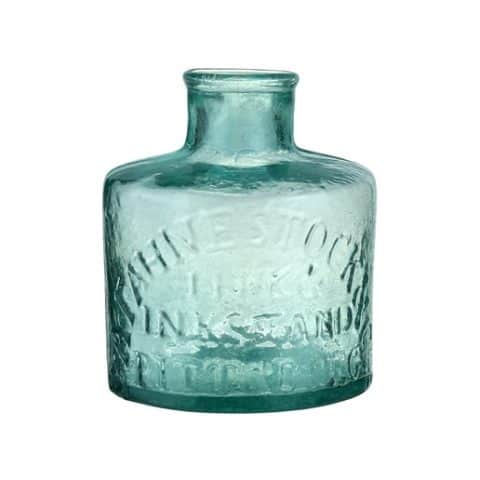 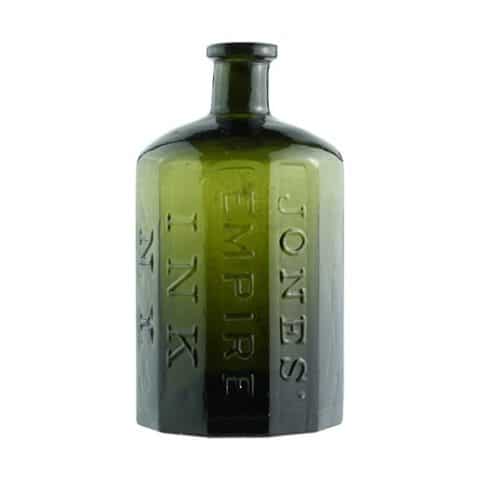 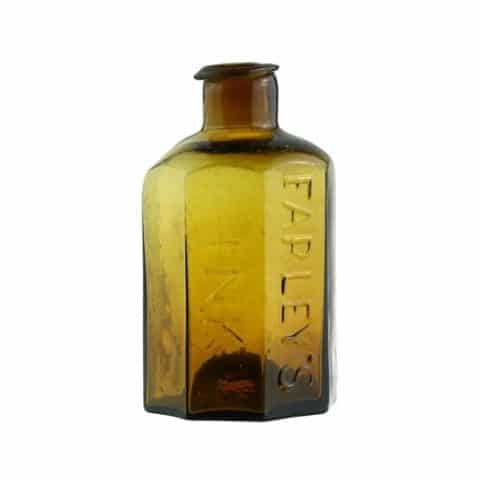 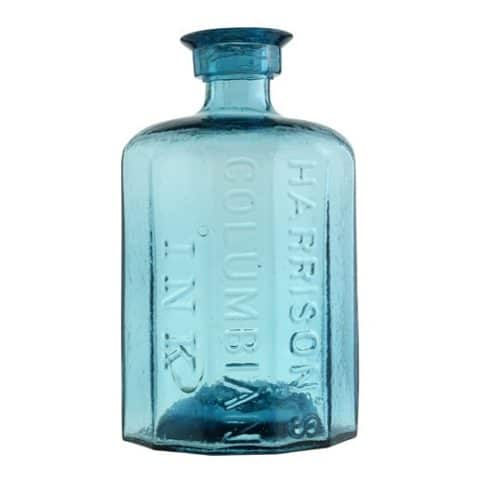 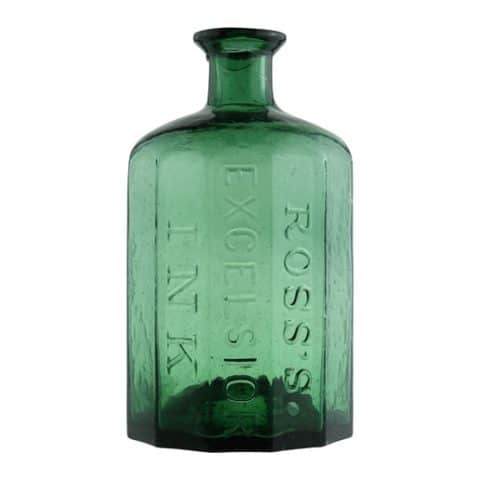 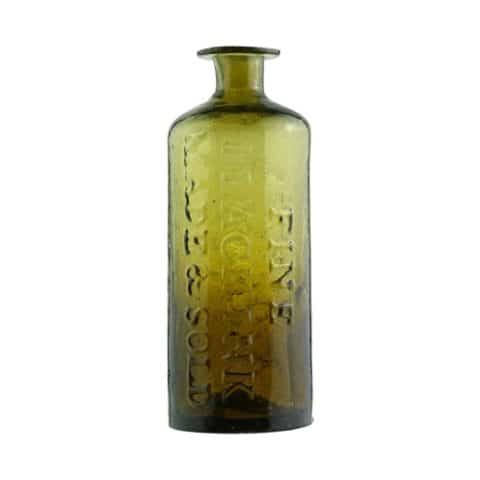 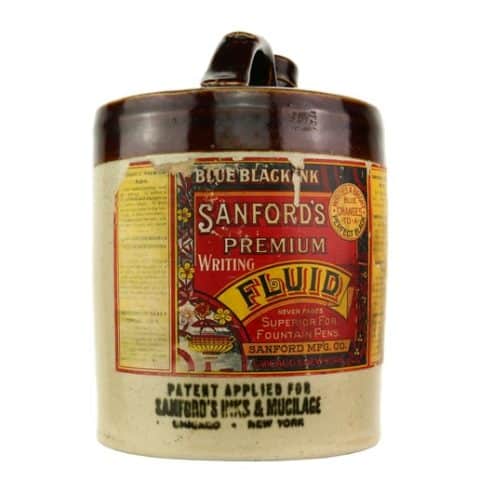 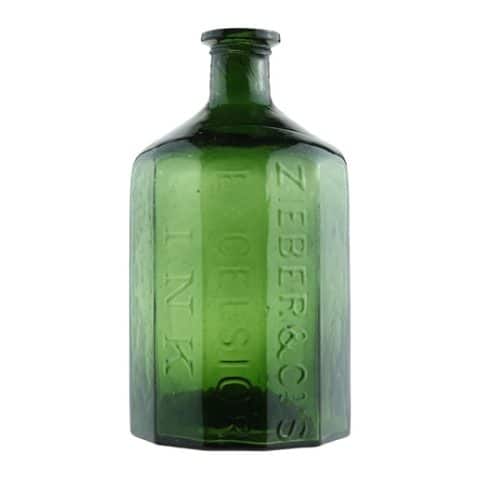